Black vs White Pepper: Which Is Right for You? 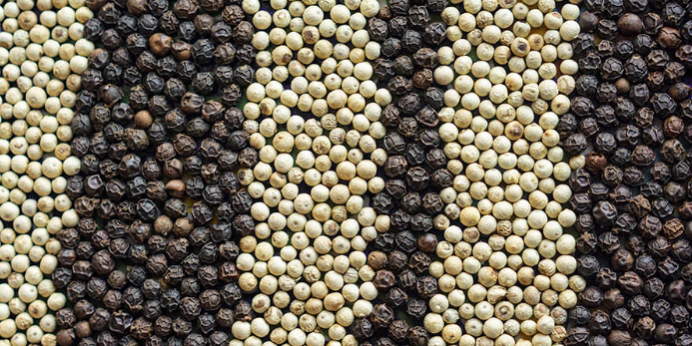 Start at the beginning: the pepper plant, cultivated from India to Indonesia to Madagascar, into prolonged pepper vines covered around trees, latticework, and homes surrounding. The fruit of these climbing vines ripens to a radiant, pungent red; from there, they are dried to either jet-black peppercorns or the mystifying white pepper. If you know anything about cooking, you’ve probably heard about the different varieties of pepper. There’s black and white pepper, both of which have unique tastes and uses.

But how do they differ? And which one is suitable for your kitchen? Let’s break it down!

Black and white peppercorns are fruit berries from the plant piper nigrum. The main difference between the two is the procedure of processing.

1. THE MAIN DIFFERENCE IS THE MANNER OF PROCESSING:

According to Dr. Nosheen Abbas, an Islamabad-based renowned Nutritionist, ”both black and white pepper arrive from the same origin, the pepper plant. The main difference is in the manner of processing. While black pepper has an outer coating, this layer (coating) is removed in the case of white pepper. Regardless, they are used in distinct cookeries due to the difference in their sizzling hotness. White pepper is hotter in taste than black pepper and is generally used in French cooking. At the same time, black pepper is an essential staple ingredient in the American kitchen.”

Let’s see what the other differences between black pepper and white pepper are:

Turmeric is famous for its anti-inflammatory and antioxidant effects, and white pepper aids in activating turmeric’s effects and promoting good digestion only. Combined, they make milk more digestible; turmeric milk causes the turmeric and white pepper to dry less. In contrast, the black pepper and turmeric duo is considered the most powerful combination ever and is very beneficial in supplementing turmeric curcumin. Because ‘piperine’ in black pepper and ‘curcumin’ in turmeric benefit people with multiple health problems such as arthritis, pain, inflammation, brain issues, heart problems, and so on.

The vitamin comparison score depends on the number of vitamins by which one or the other food is richer in vitamins. The “coverage” chart below displays how much of the daily needs can be covered by 300 grams of the food.

The mineral comparison score depends upon the number of minerals by which one or the other food is richer in minerals. The “coverage” chart below depicts how much of the daily needs can be covered by 300g of food.

Black pepper has a more pungent, intense scent that’s easy to pick up on. White pepper is milder than black, and its aroma is more aromatic—like fresh herbs sprinkled into the bowl of a hot summer meal. You may have heard that white pepper won’t actually make you feel hotter when you eat it. While this might be true, if you’re sensitive to spice, white pepper doesn’t give your taste buds any advantage over black in terms of how much heat it delivers. On the other hand, if pungency isn’t what gets your motor running, then white pepper might be what you need in your kitchen cabinet!

Black pepper lasts longer as compared to white pepper. If you keep it in an air-tight container or jar, black peppercorn can stay for a year. However, within a few months, the grounded (crushed) mixture loses its best sizzling flavor. This is why you can find jars of whole pepper with built-in grinders. Since white pepper is more “uncovered” than black, it drops its flavor speedily. It will turn stagnant, and you won’t even know it. So if you select to cook with white pepper, remember it should be fresh in form.

The appearance of black pepper ranges from dark brown to black, with the seeds clinging together in small clusters. White pepper is light brown or yellow; the grains tend to be smaller and more finely ground. Black pepper can also be referred to as green pepper. White peppercorns are dried berries that turn pink when picked before they ripen into a red fruit. Black and white peppercorns originate from the same plant species: Piper nigrum (the scientific name for black pepper).

Black pepper is a pungent, full-bodied seasoning that can be used in cooking and as a “savory garnishing.” In contrast, White pepper tends to have a subtle flavor and is often used in cooking. Both black and white peppers are made from the same plant but processed differently, resulting in different flavors and textures. The difference between using black or white pepper depends on how you want your food to taste when it’s done cooking. Black pepper will add more flavor than white pepper, but both have their benefits.

Black pepper is less expensive than white pepper for the apparent reason that it’s more common. The peppercorns used to make black pepper are harvested, dried, and sold in bulk. Because of this, they’re less labor-intensive to produce so you can buy them at lower prices.
White pepper isn’t necessarily more expensive than black on a pound-for-pound basis; however, because it’s such a rarer commodity with higher production costs due to higher labor standards and more extended shelf life requirements (white peppercorns have to be washed regularly), they cost more per ounce than their darker counterparts.

There are two main ways to use peppercorns: complete form and ground. Whole black and white pepper can be used as a garnish over food, but this isn’t the best way to enjoy them. If you want the full flavor of black or white pepper, go for freshly ground. You can grind black and white peppercorns in a mortar and pestle (a bowl-shaped tool for grinding herbs) or with an electric grinder that uses blades instead of wheels—the latter is what we recommend if you prefer more control over how finely your spices are ground.

NOTE: If you don’t have an electric grinder (or don’t want one), opt for pre-ground pepper rather than buying whole berries or berries with a loose husk on them; this will ensure your herb has been thoroughly processed before reaching your meal preparation area.

Black vs. White Pepper: Which is Right for you?

It’s up to you what kind of dishes you are making. Apart from this, you can evaluate better by seeing this summarized table. We hope so; it’ll help you to decide. Pay heed to the most right column. It displays the amounts side by side, making it more effortless to discover the amount of difference.

Pro Tip: Research the dishes you want to make and your uses for black vs. white pepper before buying.

Before you buy your first jar of black or white pepper, do some research. What are the types of dishes you’re making? What flavors do those dishes have? Then, take a look at what the spice aisle has to offer. Will any of those spices complement your dish? If so, choose that one and vice versa if not.

We hope we’ve helped you decide which type of pepper is right for you. With all the different varieties of pepper on the market today, there’s no shortage of options—so keep trying until you get it right! Remember that the most important thing when cooking is experimenting with your tastes and finding out what works best.

Disclaimer: This content concerning advice intends to provide general information only. It is in no way an alternative to a competent medical opinion. Always confer with your healthcare provider for more details. AMVital does not hold liable for this information.

Black Pepper for Acne: Is it Effective?
January 18, 2023
Search
Recent posts
Go to Top
%d bloggers like this: