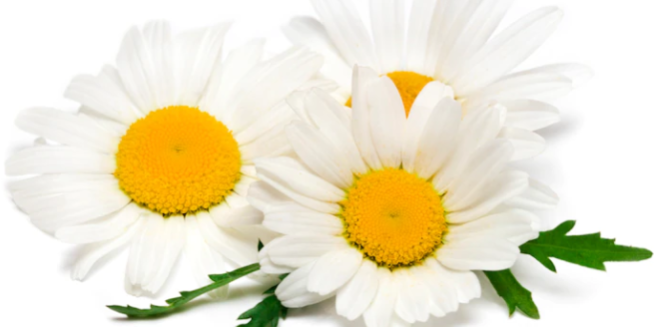 Chamomile is one of the most well-known medicinal herbs in the world, and it’s easy to see why. It is a member of the Asteraceae/Compositae clan. It has two varieties in common. German Chamomile (Chamomilla recutita) and Roman Chamomile (Chamaemelum nobile). Its dried flowers are known as florets or heads. These flowers have terpenoids and flavonoids, giving them medicinal effects. Chamomile preparations are generally used for many human conditions, including hay fever, inflammation, muscle cramps, menstrual disorders, insomnia, ulcers, wounds, gastrointestinal disorders, rheumatoid pain, and hemorrhoids. Today, chamomile is still commonly found in teas, soups, and salads due to its sweet flavor and soothing properties. Essential oils of chamomile are employed broadly in cosmetics and perfumes. Different preparations of chamomile have been formed. The most popular among them is herbal tea, consuming rate of more than one million cups per day.

In this article, you’ll learn the following:

Chamomile is a flowering plant that’s native to Europe and Asia. Ancient medical scripts of Greece, Egypt, and Rome cited it as a powerful medicinal herb. The plant has been used for thousands of years and found on Egyptian tombs dating back to 1500 BCE. It’s also one of the most widely used herbs by European cultures since medieval times. The Latin name for chamomile is Matricaria chamomilla. Chamomile was initially grown in Europe and Asia, but today it can be found in North America as well. The flowers are used to make teas, extracts, and oils that are used for medicinal purposes. Presently, chamomile is publicized for sleeplessness, anxiety, and gastrointestinal disorders (such as upset stomach, gas, and diarrhea). People also used it topically for skin ailments and mouth sores of post-cancer treatment. It’s also been used topically to treat eczema and psoriasis.

The name “chamomile” or “camomile”  means “a ground apple,” a reference to the plant’s yellow flowers, which look like tiny apples. It has a sweet, apple-like scent and is used for many things—from tea to aromatherapy.

APPEARANCE:
If you’ve ever been in the garden section of a grocery store, you’ve probably seen chamomile sitting on the shelf alongside other herbs like oregano and basil. The flowers look like little daisies, with white petals surrounding yellow centers (though some varieties have pink or purple petals).

FORMS:
Chamomile can be found in two forms: dried flowers for teas and oils extracted from the plant’s seeds.

GERMAN CHAMOMILE is the more common and has a higher concentration of essential oils than its sister plant. It also contains higher levels of azulene, an antioxidant thought to help soothe inflammation in the body. This version is most often used for medicinal purposes.

ROMAN CHAMOMILE has fewer essential oils, so it’s less potent when relieving symptoms like bloating or stomach cramps. It does contain high amounts of linalool and linalyl acetate, though, both of which can be calming and soothing when ingested in small quantities (but not large ones).
Roman Chamomile: A More Relaxing Option
If you want a more relaxing option for your tea or bath blends, consider using Roman chamomile instead of German—especially if your primary goal involves sleeping better at night!

TRADITIONAL USE OF CHAMOMILE PLANT

This plan has been used traditionally owing to its anti-inflammatory, anti-anxiety, and pain-killing effects. Chamomile contains certain compounds called flavonoids that have anti-inflammatory properties that may help reduce swelling in the body.

Chamomile is widely used to treat skin inflammations and bacterial infections of the skin, oral cavity and gums, and respiratory tract. It has been shown to work as an anti-inflammatory and an analgesic, which can help relieve pain. In addition, it can also be used as a soothing agent (to calm down irritation and inflammation) and to help improve sleep quality. As a traditional medicine, it helps heal wounds, ulcers, eczema, gout, skin irritations, bruises, burns, canker sores, neuralgia, sciatica, rheumatic pain, hemorrhoids, mastitis, and other conditions. For external use, chamomile has been used to treat diaper rash, cracked nipples, chicken pox, ear and eye infections, and eye disorders.

As an Anti-anxiety agent:

It also has some anti-anxiety effects—chamomile tea is often recommended for those who suffer from anxiety or panic attacks because it helps them relax without being sedated or causing any side effects like drowsiness. Some research suggests chamomile may act as an antioxidant when consumed orally. At the same time, research is still in the pipeline to translate its anti-cancer impacts into this potential benefit of chamomile tea. If you like drinking it after working out at the gym or when you wake up on Saturday morning, don’t worry too much about whether or not it actually makes a difference in reducing your risk factors for cancer!

Use in Beer and Ale:
Chamomile has historically been used in preparing beer and ale. The whole plant has been used to make beers and ales for bitterness.

What are “Chamomile Benefits”?

In a forthcoming, randomized, double-blind, placebo-controlled study, 68 healthy infants with colic (2 to 8 weeks old) received either herbal tea or a placebo (glucose, flavoring). Each infant received treatment with every bout of colic, up to 150 mL/dose, thrice a day. After a week, parents reported that the tea eradicated the colic in 57% of the infants with no side effects.

Another study analyzed the impact of a chamomile extract and apple pectin preparation in 80 children (age: 5 months to 5 years) with acute, non-complicated diarrhea who received either the chamomile/pectin preparation or a placebo for 3 days. Diarrhea terminated shortly in children treated with chamomile and pectin (85%) compared to the placebo group (58%). These results confirm that chamomile, with other herbs, can safely treat infant colic ailments.

Traditionally, chamomile plant extracts fixed several gastrointestinal disorders, including the upset digestive system, “spasm” or colic, flatulence (gas), ulcers, and gastrointestinal irritation. This plant is quite helpful in dispelling gas, soothing the stomach, and relaxing the muscles that drive food via the intestines. Chamomile tea treats other digestive issues like indigestion, bloating, and gas pains. For this, drink this tea before bedtime; you may be able to sleep better through the night without waking up because of these digestive problems.

Traditionally, chamomile practices such as tea and essential oil aromatherapy were used to treat sleeplessness and cause calming effects. To date, it is widely assumed as a mild tranquilizer and sleep-inducer. Studies in pre-clinical samples have shown to soothe the pain caused by nerve damage. Clinical trials are missing, although 10 heart patients are reported to have instantly fallen into a deep sleep lasting about 1 hour after drinking chamomile tea. It exhibited benzodiazepine-like (a type of sedative medication) hypnotic action. These effects are due to the flavonoid ‘apigenin’ in the extract. Blends other than apigenin in chamomile plant extract can also bind BDZ and GABA receptors in the brain. However, many of these compounds have been unidentified till now. Apart from this, you can take turmeric golden milk to induce comfortable sleep.

Researchers claimed that the intake of chamomile tea boosts the immune system and helps fight infections linked to colds. The common cold is a mild viral infectious disease in the upper respiratory tract. Generally common cold is not life-threatening; however, complications (like pneumonia) can lead to death if not correctly treated. Studies show that inhaling steam with chamomile extract is beneficial for common cold symptoms; however, further research can better prove these findings.

Chamomile has been regarded as a treatment for generalized anxiety disorder. A report suggests that German chamomile showed significant inhibition of GAD action. The recent controlled clinical trial showed that chamomile extracts for GAD might have subtle anxiolytic activity in patients with mild to average GAD. Extracts of chamomile (M. Recutita) have beneficial effects on convulsions caused by picrotoxin (central nervous system stimulant). Likewise, apigenin has been shown to reduce the levels of picrotoxin-induced seizures. Chamomile tea is often recommended for those who suffer from anxiety or panic attacks because it helps them relax without being sedated or causing any side effects like drowsiness.

In a double-blind trial, 14 patients underwent dermabrasion of tattoos. The effects of drying and covering a wound with epithelial tissue (which forms the outer layer of a body’s surface) were observed. The result showed that chamomile is statistically effective in wound drying and speedy epithelialization (formation of the skin surface). Besides, a study also assessed the antimicrobial activity of the herb against various microorganisms. The test group in a study, after two weeks, exhibited a more significant reduction in the wound area with 61% improvement compared to controls. The study also noted faster epithelialization. Histological observations support the use of M. Recutita (camomile) in wound management. Current studies suggest that this herb help wound heal faster than corticosteroids. However, further studies can only consider this extract for clinical use. Some research has reported that it may be as effectual as hydrocortisone cream for eczema.

If you drink chamomile tea before bedtime, you may be able to sleep better through the night without waking up because of these digestive problems. Additionally, since chamomile can help relieve bloating, drinking it regularly might make your tummy look flatter after drinking! You can even lose weight by sleeping better at night. This will give your metabolism more time each day to burn fat stores for energy instead of storing them again overnight as glycogen (carbohydrate energy). This will only happen after a while, so don’t expect miracles here, but over time this could lead towards weight loss if combined with other healthy habits like eating less junk food, etcetera.

Essential oils from Roman chamomile are the basic elements of aromatherapy. Clinical trials of aromatherapy in cancer patients have shown no statistically significant differences between treated and untreated patients. Another pilot study investigated the effects of aromatherapy massage on the anxiety and self-esteem experience in Korean elderly women. Each massage session lasted for 20 min and performed 3 times per week for two 3-week periods with an intervening 1-week break. This intervention yielded notable differences in anxiety and self-esteem. These results suggest that aromatherapy massage positively reduces stress and increases self-esteem.

Side Effects & Interactions with Chamomile

Chamomile is generally safe for most people but can cause some side effects. The most common side effect is drowsiness, but others include headache and stomach upset. If you have chamomile, doctors often recommend tea for those who suffer from anxiety or panic attacks because it helps them relax without being sedated or causing any side effects like drowsiness. Those with high blood pressure or who are taking certain medications, such as anti-depressants or birth control pills, talk to your doctor before using chamomile. Chamomile may also interact with diuretics, sedatives, and antihistamines (allergy medications).
It’s not recommended for pregnant or breastfeeding women because it may cause contractions, making your labor more painful. The essential oil of chamomile may be toxic for children under 2 years old.

FDA’s GRAS (generally recognized as safe) list mentions chamomile as safe. Some reports of allergy reactions to chamomile are due to its contamination with “dog chamomile,” a highly allergic plant of the same appearance.

The flowering lids of this daisy-like plant are used to make teas, liquids, capsules, or pills. You can apply this herb to the skin as a cream, ointment, or mouthwash.

For making tea, pile a teaspoon of chamomile flowers in a cup of boiling water for about 10 minutes before straining. You can also buy commercial teas. Chamomile is also available in capsule form.

As a gargle or mouthwash, prepare it as tea, then let it cool. Gargle when desired. You can also make an oral wash by pouring 10 to 15 drops of German chamomile liquid extract (aka tincture) in 100 ml warm water.

There is no standard dosing of chamomile. For example, capsules containing 220 to 1100 mg of German chamomile extract taken daily for eight weeks helps alleviate anxiety.